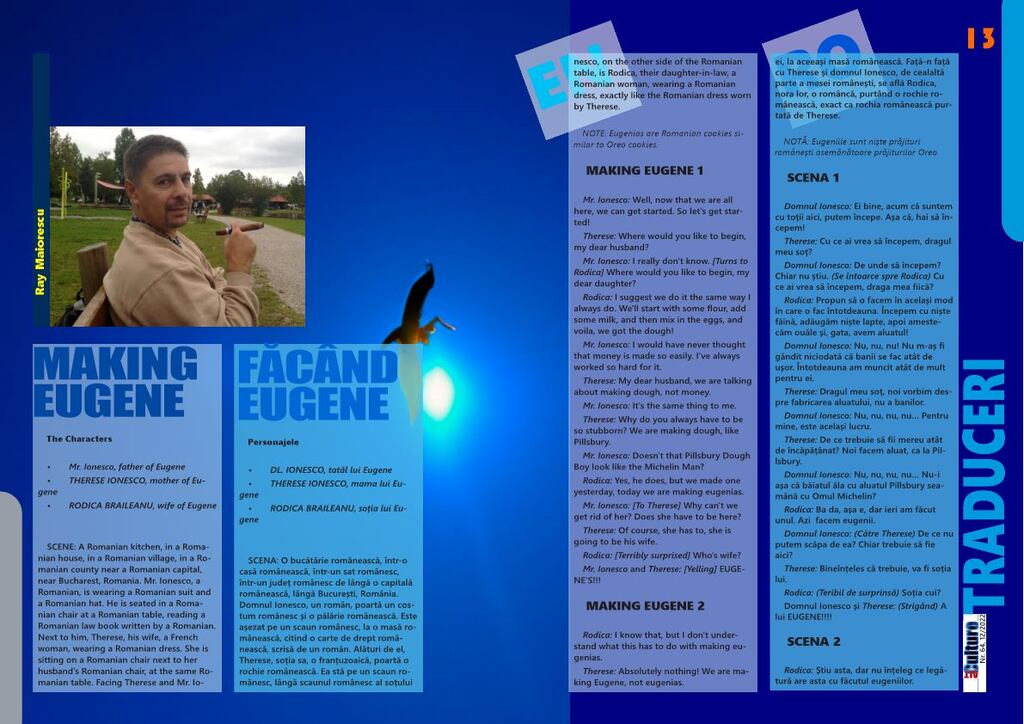 MAKING EUGENE 1
Mr. Ionesco: Well, now that we are all here, we can get started. So let’s get started!
Therese: Where would you like to begin, my dear husband?
Mr. Ionesco: I really don’t know. [Turns to Rodica] Where would you like to begin, my dear daughter?
Rodica: I suggest we do it the same way I always do. We’ll start with some flour, add some milk, and then mix in the eggs, and voila, we got the dough!
Mr. Ionesco: I would have never thought that money is made so easily. I’ve always worked so hard for it.
Therese: My dear husband, we are talking about making dough, not money.
Mr. Ionesco: It’s the same thing to me.
Therese: Why do you always have to be so stubborn? We are making dough, like Pillsbury.
Mr. Ionesco: Doesn’t that Pillsbury Dough Boy look like the Michelin Man?
Rodica: Yes, he does, but we made one yesterday, today we are making eugenias.
Mr. Ionesco: [To Therese] Why can’t we get rid of her? Does she have to be here?
Therese: Of course, she has to, she is going to be his wife.
Rodica: [Terribly surprised] Who’s wife?
Mr. Ionesco and Therese: [Yelling] EUGENE’S!!!

MAKING EUGENE 2
Rodica: I know that, but I don’t understand what this has to do with making eugenias.
Therese: Absolutely nothing! We are making Eugene, not eugenias.
Rodica: So why would Mr. Ionesco want to make him out of dough?
Mr. Ionesco: Because we want to mold him, but not out of dough. If he’s out of dough he’s going to be poor. I don’t want my son to be poor.
Rodica: If that’s the case, should we be in the kitchen?
Mr. Ionesco: We can do it anywhere, but we would rather keep it confined to the kitchen so the rest of the house stays clean.
Therese: If we are going to do it in the kitchen I’m going to bring in the chairs for our guests, but I don’t think we have enough room in the kitchen.
Mr. Ionesco: Don’t be silly. The kitchen is in a room, right?
Therese: Yes!
Mr. Ionesco: Well, if the kitchen is in a room, then, obviously, there must be room in a kitchen. And I don’t care where they sit. If we don’t have enough room, they can stay outside and look through the window.
Therese: But that would not be polite. We can’t have our guests outside. You know what people will say about that.
Mr. Ionesco: Who cares about those rhinos? They can sit anywhere. If we don’t have enough room in the kitchen, they will have to sit outside. Therese, why don’t set up the chairs in the garden? Rodica, why…

MAKING EUGENE 4
the Porcescu family, the Georgescu family, the Cristescu family, the Grigorescu family, the Monetescu family, and that family with that strange kid, what’s his name? Adam? Yes, the Adam family.
Rodica: At what time are they going to arrive?
Therese: They are going to arrive later, but we won’t invite them.
Mr. Ionesco: That’s right, the three of us and our guests, but we won’t invite them. [Turning to Rodica] Did you set up the mirrors like I showed you, my dear daughter?
Rodica: I don’t know what mirrors you are talking about.
Mr. Ionesco: About the ones on the diagram. I showed you how to do it a few nights ago.
Rodica: Oh, you mean those for our guests that we will not invite.
Mr. Ionesco: That’s right.
Rodica: I did that yesterday when I brought over the flour and the eggs.
Therese: Why did you bring them over? I told you not to turn them upside down.
Rodica: I’m sorry! I just brought them here, then I set the mirrors according to the diagram Mr. Ionesco drew up for me a few nights ago.
Mr. Ionesco: Let’s abandon this subject. What Romanian food are we going to have for Romanian guests?
Rodica: We are only having four Romanian guests? What Romanian food are we going to serve to Romanian guests?

MAKING EUGENE 5
Therese: Why would you feed only two Romanian guests? I thought we had food for four fine ferocious,…I’m sorry! I meant voracious, Romanian guests.
Mr. Ionesco: For the four others, we are going to have two Romanian dishes.
Rodica: We are going to serve two dishes for four people and all five people will eat out of two dishes?
Therese: Yes, and I hope they don’t mind. Those are the last two plates I have. But I will give them a lot of forks. I wouldn’t worry too much about it because we are not going to invite them anyway.
Mr. Ionesco: I think we have organized ourselves very well and now it is time to assign duties. Therese, you must tell Rodica what her involvement is in all of this. Rodica, you must tell Therese what her involvement is in all of this. Therese, you must tell me what my involvement is in all of this. Rodica, you must know what everyone’s involvement is in all of this.
Therese: Rodica, as you know, our son, Eugene, has chosen you to be his lawful wedded wife, to have and to cherish, from this day forward, for richer and for poorer, in sickness and health, until death do you apart, so help you God.
Rodica: I do!
Mr. Ionesco: I’m glad you do. If you didn’t, we would have a big problem. We are going to have all this guests we will not invite, and we would look foolish if you did not become Eugene’s wife.

MAKING EUGENE 6
Therese: Anyway, as the wife of my son Eugene, you must continue to take care of him after I turn him over to you.
Rodica: Wait a minute! Isn’t it bad to turn him upside down and flip him over when he’s so little?
Therese: That’s true, but I’ll give him to you when he’s older, and he will probably enjoy it if you turn him over. However, you must remember why you are here. Right now we are going to decide what qualities our son is going to have and we want your input. We want to be happy with him, but we also want you to be happy with him. If you do that, he will be happy, and we will be happy together, like one big happy family. When I turn him over to you , you must continue to take care of him just as well as I have, if not better. I hope your mother has told you what expectations a husband has from his wife. If I feel that you do not fulfill them, I must take my son away from you. I want you to know that I will monitor you constantly and make sure that you fulfill your obligations.
Rodica: I understand my involvement in all of this. I want you to know that I expect you to raise your son properly and teach him to treat his wife as he would his mother, but with more tender kisses. The transition from you to me should be very simple, and as for the differences, I am sure he will enjoy them. As for you, Mr. Ionesco, I expect you to teach your son all manly things. I know there aren’t many of them, so I will not bother you anymore.

MAKING EUGENE 7
Mr. Ionesco: Now, since everyone else has spoken, it is my turn, and I will have the last word. I am the man after all, I am the king of this castle.
Therese: I thought I had told you to stop watching „The Honeymooners.”
Mr. Ionesco: You are right my dear. I am sorry for I have not followed your precious guidance.
Therese: You are forgiven, my darling. Please continue.
Mr. Ionesco: [Toward the spectators] I have made the following decisions. Our son’s name will be Eugene Ionesco. He will be born on November 26, 1912, twenty-nine days before Christmas, which is exactly how long the month of February is once every four years. Being born on that day, twenty-nine days before Christmas, will allow us to have the month of February for twenty-nine days, between November 26 and December 25. But this is not important. What is important, is for my son to be able to become a mainstream member of society. He will behave like everyone else, and will do what everyone else does. He will never question authority and will do as he is told. He will respect his mother and his wife and will do all manly things as taught by me. Therese, now it is your turn.
Therese: [Toward the spectators] Well, as every mother does, I want my son to be the most intelligent and the best looking man on earth. I am sure he will be. I want him to become famous. I am sure he will. After I turn him over to Rodica, he will become one of the greatest writers of all time. He will be so famous we will be known as the Eugene family instead of Mr. and Mrs. Ionesco. Of course, I expect Rodica to give him 2.75 children, just as many as all other families have. Eugene will be a master of language. He will speak Romanian, French and English. His masterful control of these languages will allow him to control everyone around him, or nobody at all. He will be the hero of his peers, and he will also be the villain. He will be everything. Now, my husband will deliver our son’s eulogy.
Mr. Ionesco: [Toward the spectators] This is a happy, yet tragic moment. Here we are, trying to bring to life our precious son, and at the same time we are parting with him. Our guest are all here, but we did not invite them, so they might not show up, but I want them to hear this. As you all know, my son was a famous writer. He did not live in nor desired the utopian society I envisioned for him, but he made us all proud and he will always be remembered. My fondest memory of him is day he arrived among us, the day he was born. He had just opened his eyes for the first when he quickly covered them up with his hands, in horror, as a herd of rhinos stampeded by his little bed. He survived the rhino stampede, but died soon after, at the age of 82.
Rodica: Wow! That was beautiful! [Turning to Therese] What are we going to serve our guests for desert?
Therese: I thought you knew we were making Eugenias. That’s why we have eggs and flour. We’ll make the dough, and then the eugenias. You know what they look like, right?
Rodica: Yes, they are like Oreo cookies, but white, and they have that creamy middle.
Therese: That creamy middle is the main thing, the ingredient of substance and the defining characteristic of an eugenia. But one must eat through the crust and sample the whole cookie before she gets there. And that is the rule. I dare you not to conform!

[ The conversation stops, and quietly, the three begin making eugenias, as the curtain falls.]