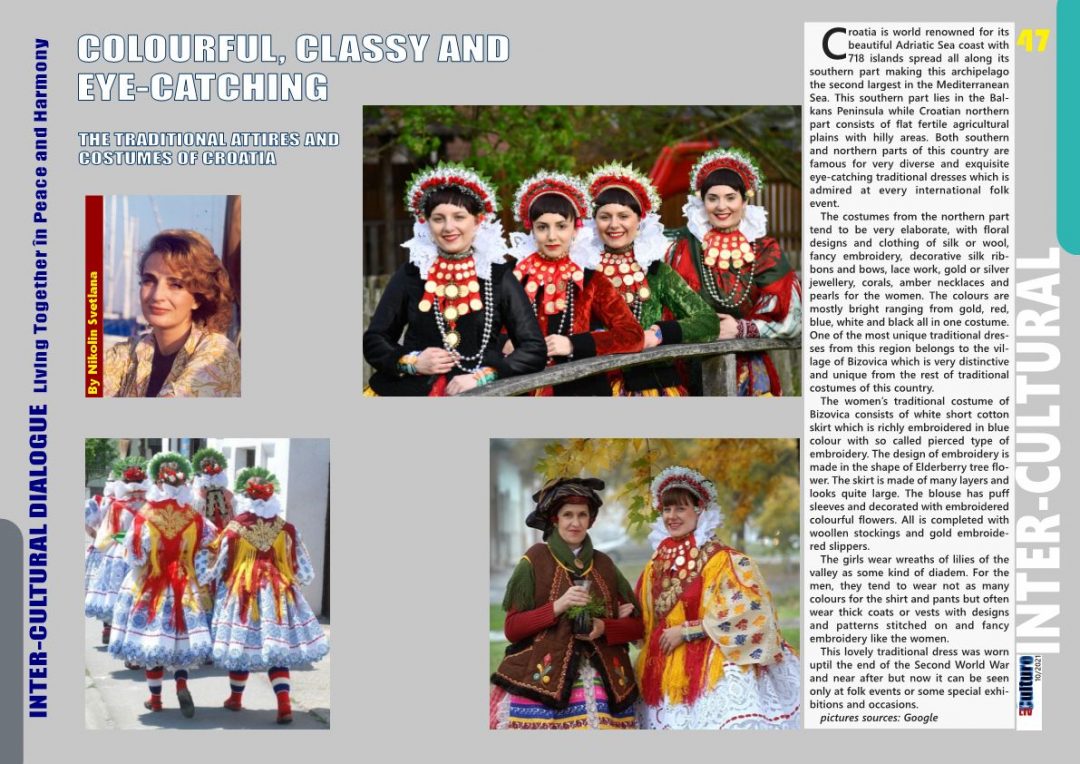 THE TRADITIONAL ATTIRES AND COSTUMES OF CROATIA

COLOURFUL, CLASSY AND EYE-CATCHING – THE TRADITIONAL ATTIRES AND COSTUMES OF CROATIA
By Nikolin Svetlana

Croatia is world renowned for its beautiful Adriatic Sea coast with 718 islands spread all along its southern part making this archipelago the second largest in the Mediterranean Sea.

This southern part lies in the Balkans Peninsula while Croatian northern part consists of flat fertile agricultural plains with hilly areas. Both southern and northern parts of this country are famous for very diverse and exquisite eye-catching traditional dresses which is admired at every international folk event.

The costumes from the northern part tend to be very elaborate, with floral designs and clothing of silk or wool, fancy embroidery, decorative silk ribbons and bows, lace work, gold or silver jewellery, corals, amber necklaces and pearls for the women. The colours are mostly bright ranging from gold, red, blue, white and black all in one costume. One of the most unique traditional dresses from this region belongs to the village of Bizovica which is very distinctive and unique from the rest of traditional costumes of this country.

The women’s traditional costume of Bizovica consists of white short cotton skirt which is richly embroidered in blue colour with so called pierced type of embroidery. The design of embroidery is made in the shape of Elderberry tree flower. The skirt is made of many layers and looks quite large. The blouse has puff sleeves and decorated with embroidered colourful flowers. All is completed with woollen stockings and gold embroidered slippers.
The girls wear wreaths of lilies of the valley as some kind of diadem. For the men, they tend to wear not as many colours for the shirt and pants but often wear thick coats or vests with designs and patterns stitched on and fancy embroidery like the women.
This lovely traditional dress was worn uptil the end of the Second World War and near after but now it can be seen only at folk events or some special exhibitions and occasions.