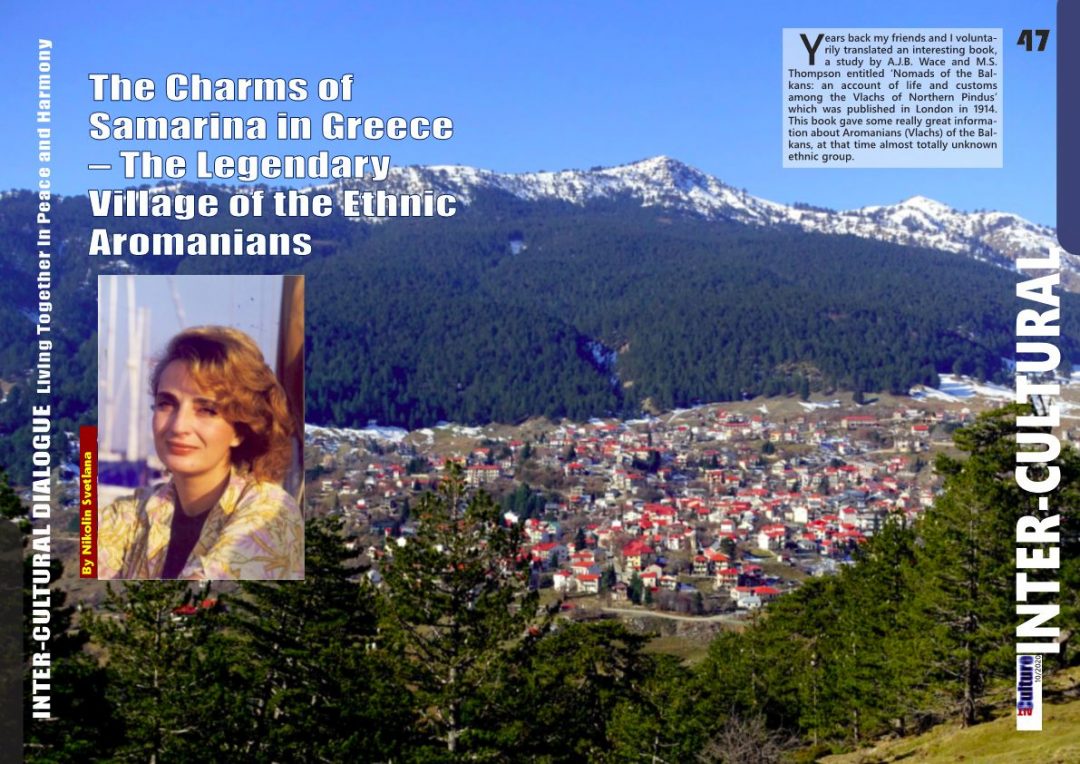 Years back my friends and I voluntarily translated an interesting book, a study by A.J.B. Wace and M.S. Thompson entitled ‘Nomads of the Balkans: an account of life and customs among the Vlachs of Northern Pindus’ which was published in London in 1914.
This book gave some really great information about Aromanians (Vlachs) of the Balkans, at that time almost totally unknown ethnic group.

Native to the Balkan peninsula (southeast Europe) this Romanised ethnic group traditionally living in northern and central Greece, central and southern Albania, Republic of North Macedonia, south-western Bulgaria and spread throughout Montenegro, Croatia with the Dalmatic Mountains, south parts of Slovenia with the Istrian Peninsula and scattered all over Serbia have contributed hugely to all Balkan countries in all fields of social life from culture, education to economy and politics.
In this amazing book about Aromanians at the beginning of the 20 century, the authors gave special account to one village of Aromanians – Samarina, which is located at an altitude of 1,600 meters and settled on the slopes of Mount Smolikas (2,637meters), the highest peak of the huge Pindos range of Greece and in Greek North West Macedonia.
It is one of the highest villages in the whole Balkans and is considered one of the most famous of all the Aromanian (Vlach) villages.
It is almost completely inhabited by Aromanians (many times called Vlachs) who are fiercely proud of their distinct heritage and traditions.
Samarina had especially successful periods of exceptional economic growth and cultural development during 18th and 19th century.
The economic success was based mostly in cattle-breeding, small industries and the trade and the arts.

They were famous muleteers and pioneered long caravans that travelled and trade all over the Balkan peninsula. Samarina at that time had school, library, beautiful stone and wood houses, cobbled streets, lovely square and famous fresco and woodcarving artists. Nowadays Samarina has managed to keep its beauty and charm which can be seen the best during summer when its people scattered all over the world in search of better life, gather in their ancestral village and on 15th of August – on the feast of the Dormition of the Virgin, celebrate this holiday and their reunion with famous Aromanian ‘ Great Dance’ (Corlu Mari) in Samarina’s square when thousands of people perform its noble and elegant dance.
Samarina today has a population of only 378 people and during its harsh mountainous winters the number is even less but it remains in memories of all Aromanians of the Balkans as a great historic place of their community and holder of their tradition and heritage.
The book ‘Nomads of the Balkans: an account of life and customs among the Vlachs of Northern Pindus’ can be found online and I hope that some of my friends will read it and get to know more about Aromanians, my great, amazing vanishing tribe.