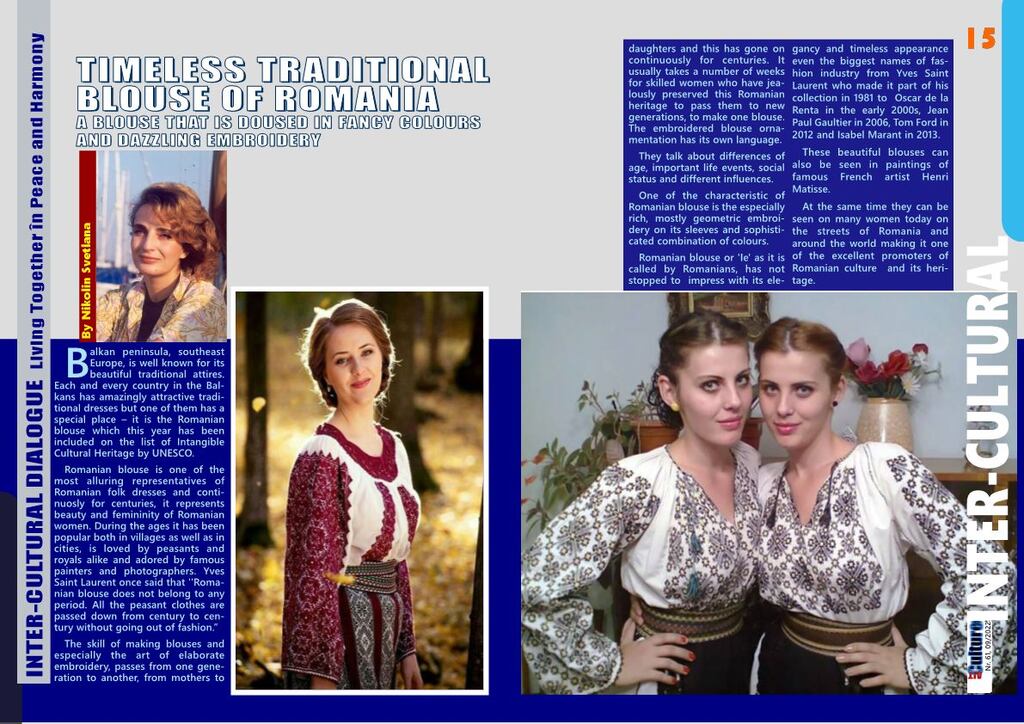 A BLOUSE THAT IS DOUSED IN FANCY COLOURS AND DAZZLING EMBROIDERY

Balkan peninsula, southeast Europe, is well known for its beautiful traditional attires. Each and every country in the Balkans has amazingly attractive traditional dresses but one of them has a special place – it is the Romanian blouse which this year has been included on the list of Intangible Cultural Heritage by UNESCO.
Romanian blouse is one of the most alluring representatives of Romanian folk dresses and continuosly for centuries, it represents beauty and femininity of Romanian women. During the ages it has been popular both in villages as well as in cities, is loved by peasants and royals alike and adored by famous painters and photographers. Yves Saint Laurent once said that ”Romanian blouse does not belong to any period. All the peasant clothes are passed down from century to century without going out of fashion.”
The skill of making blouses and especially the art of elaborate embroidery, passes from one generation to another, from mothers to daughters and this has gone on continuously for centuries. It usually takes a number of weeks for skilled women who have jealously preserved this Romanian heritage to pass them to new generations, to make one blouse. The embroidered blouse ornamentation has its own language.
They talk about differences of age, important life events, social status and different influences.
One of the characteristic of Romanian blouse is the especially rich, mostly geometric embroidery on its sleeves and sophisticated combination of colours.
Romanian blouse or ‘Ie’ as it is called by Romanians, has not stopped to impress with its elegancy and timeless appearance even the biggest names of fashion industry from Yves Saint Laurent who made it part of his collection in 1981 to Oscar de la Renta in the early 2000s, Jean Paul Gaultier in 2006, Tom Ford in 2012 and Isabel Marant in 2013.
These beautiful blouses can also be seen in paintings of famous French artist Henri Matisse.
At the same time they can be seen on many women today on the streets of Romania and around the world making it one of the excellent promoters of Romanian culture and its heritage.