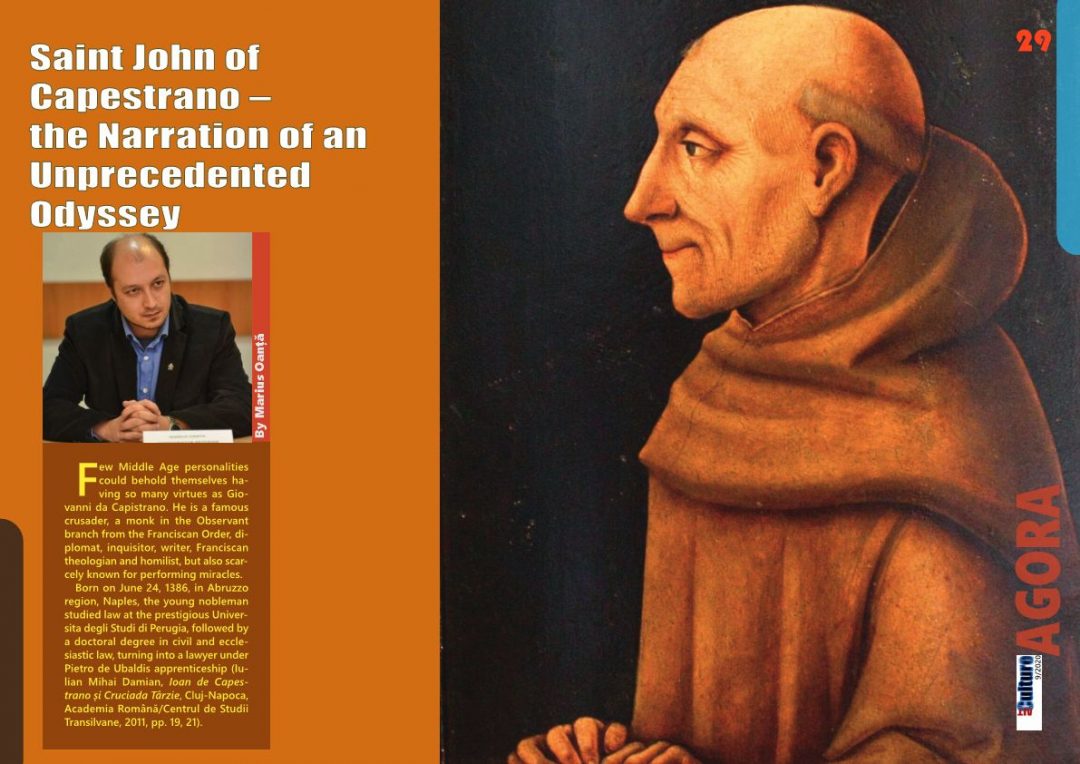 Few Middle Age personalities could behold themselves having so many virtues as Giovanni da Capistrano. He is a famous crusader, a monk in the Observant branch from the Franciscan Order, diplomat, inquisitor, writer, Franciscan theologian and homilist, but also scarcely known for performing miracles.

In 1416, during his diplomatic work, Capestrano was sent as an ambassador responsible for negotiating peace treaties between Perugia and Malatesta, although he was unable to exert its commission over that matter, due to being incarcerated. „In that refinedly pontifical politics, John of Capestrano did not complied with the institutional tasks of a traditional pontifical assignee, but as a collateral and exceptional one, such as a pontifical commissary (invoked in comparison with Rokyczana hussit Archibishop)” (Ibidem, p. 39).

During imprinsonment, after long meditations, he admitted that his relationship with his spouse was not consumed, which lead to their separation. Under the guidance of the upcoming Saint Bernardino of Sienna, he decided to take the vows under Saint Francis and becoming a monk under “brothers of the regular Observance” congregation. During his preaching era, he dedicated himself to an ascetic lifestyle, repentance and teaching the Holy Gospels in public places.

John of Capestrano (1386-1456) lived contemporary with a number of important events such as: Council of Basel (1433), Crusade against Hussite factions (1419-1436), Wroclaw Pogrom (1453), Siege of Belgrade (4-22 July, 1456). During Ottoman Empire expansion, an elderly John of Capistrano received the assignment alongside other crusade preachers to teach others the Christian Faith Truths and to fight against the Turks.

John of Capestrano preached with devoutness to disadvantaged people, reiterating the need to continue the crusade against the Turks, in such a manner that many poorly armed peasants and farmers, only with schytes and pitchforks but full of enthusiasm, have gathered themselves under Iancu of Hunedoara`s flag. During Mehmed II Siege of Belgrade, Iancu main battle group consisted of experienced mercenaries joined by crusaders, peasants and horse riders amongst aristocrats, who tallied up to 30 000 souls.

According to historiographs, the final battle of Belgrad unfolded in the height of Turkish Crescents reign and has decided the path of Christianity by withholding Islamic cult expansion and development throughout a Christian Europe (Terézia Kerny, The Renaissance – Four Times Over. Exhibitions Commemorating Matthias’s Accession to the Throne, in: „The Hungarian Quarterly. Budapest, Hungary: Society of the Hungarian Quarterly”, 2008, pp. 79–90.). The victory was mainly assigned to Capistrano, due to the active involvement in developing the preceding events before the armed confrontations and also for force recruitment.

“Capestrano supported John of Hunedoara and his troups, alongside his crusaders in 22 July 1456, in the triumphantly defense against Belgrad ottoman army. Only few months after the Siege, he died of fever – caught in the military camp-, in the Franciscan convent, where he was attended by the monks” (Reinholdt Lovasz, Conventul franciscan din Caransebeș în lumina unor documete inedite de sec. XVIII (I), in: „Studii de Istorie Eclesiastică”, Marius Oanță (coord:), Craiova, Ed. Sitech, 2018, p. 47).

Although he survived in the battle, the bubonic plague took the life of the Franciscan monk, passing away on 23 October 1456. His remnants are placed, to eternal rest, in the Ilok Franciscan convent, in Syrmia region of nowadays Croatia. The most notable biographic documents, used as base to reiterate his life story were published in “Acta Sanctorum”, vol X. Considering this statements, it has been established that his name was worshiped during his lifetime, due to the association with the christians triumph against the Turkish army.

In 1526, after conquering the territory under Kingdom of Hungary possession, the Saint Remnants disappeared from that monastery, supposedly being retained by the ottomans. His unaltered body, that emitted a subtle scent was redeemed decades away by Barbu Craiovescu, great leader of Oltenia (1534-1535), with an amount equal with his weight in silver. Tradition claims that his remnants were light, making the Turk to exclaim :”Christians atract Christians! “.

The relics have been placed in the orthodox monastery Bistrița, owned by Craiovescu noble family, after a journey through Oltenia, being honored as Saint Gregory of Dekapolis. This story of bringing the relics to the monastery in Vâlcea County is reminded by Iulian Mihai Damian, a researcher which studied the life story of Capestrano.

In his work, John of Capestrano and The Belated Crusade, Iulian Mihai Damian portrayed the one who recovered the relics, using the following attributes:” a rich boyar from the region, Barbul Ban, who was captured by the Turks and sent far away in chains.  Fraught with despair, he prayed to Virgin Mary, honored with devotion through one of Her Holy Icon, found on his land, in a chapel. And suddently, after falling asleep with sadness and sorrow, he found himself awake the next day, safe and sound with chains around his legs, on his land, in the middle of that chapel” (Iulian Mihai Damian, op. cit., p. 300).

We could not avoid mentioning the similarities, the fact that the boyar “knew perfectly not only the thaumaturgy related reputation of the Saint from Ilok but also his attributes of protector and slave redemptor, situation in which he found himself into and made him grateful for the help” (Ibidem).

Blasius Kleiner, a concurrent witness of the events, who had the general definitor position in the order that also Capestrano belongs to, found himself in Bucharest and reported the events that took place near the Franciscan cloister from „Sfanta Vineri” neighborhood. An inedited detail is revealed in his chronics, a manuscript available in the Franciscan Order archive in Budapest, where it is mentioned: ”When this relics are taken away by ruler Stefan Racovita stern order(1764-1765), in April 1765 from Bistrita monastery to Bucharest, where they arrive on 17 May (on 5 May after the old rite), being received by the metropolitan bishop, many priests, believers and placed in Sfantul Gheorghe church in the Princely Court. In another day, when the ruler ordered to open and uncover the shroud which hid his head, those witnesses saw that the monk worn tonsure (shaved head – Author’s Note), no beard and his monachal kind was made similar to franciscan monks. Having seen those „Graeci & Valachi” – Greeks and Romanians– said: „Iste esse Sanctus Catholicorum ex istis Barath”/ „He is a catholic saint, from their brothers”. After six weeks, his body was taken back to Bistrita monastery.” (Blasius Kleiner, Archivum Tripartitum Inclytae Provinciae Bulgariae sub titulo Immaculatae Conceptionis BVM, Budapest, 1764, ms., f. 101; Reinholdt Lovasz, op. cit., pp. 47-49).

The events related by the Franciscan monk took place the same year in which the processions in hope of plague extinction are held, actions that brought together masses of humans. Curiosity lead Blasius Kleiner next to the Franciscan cloister, where the relics of his brother remained, not far away from the church where his shrine was. Those happenings are narrated, in extenso, in his important writing and manuscripts that remain.

It can be mentioned about John of Capestrano that he suggested the devotion named “Angelus Domini” to Pope Calist III, prayer that should be recited three times per day, in which the graciousness of Virgin Mary on Christianity is appealed.

To mark this moment, in the memory of the triumph against the Ottoman Empire, it is established that occidental Churches must ring their bells in the morning, at noon and in the evening.

This devotional practice, dedicated to Holy Virgin Mary, intercessor in difficult states that Christs Church passes, is maintained to this day. In remembrance of those times, John of Capestrano was recognized as the father figure of advisers and military chaplains, being commemorated in the Roman calendar on October 23, date that corresponds with his passing away.