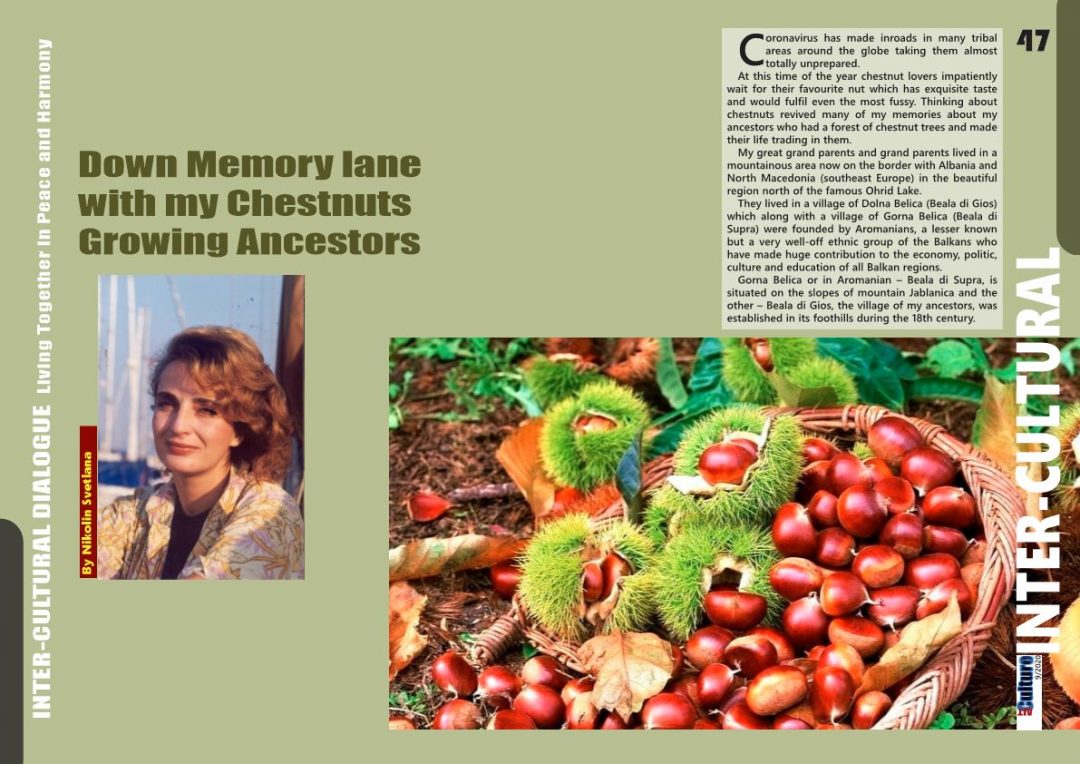 ALTculture 09/2020 – Down Memory lane with my Chestnuts Growing Ancestors

Coronavirus has made inroads in many tribal areas around the globe taking them almost totally unprepared. At this time of the year chestnut lovers impatiently wait for their favourite nut which has exquisite taste and would fulfil even the most fussy. Thinking about chestnuts revived many of my memories about my ancestors who had a forest of chestnut trees and made their life trading in them. My great grand parents and grand parents lived in a mountainous area now on the border with Albania and North Macedonia (southeast Europe) in the beautiful region north of the famous Ohrid Lake.

They lived in a village of Dolna Belica (Beala di Gios) which along with a village of Gorna Belica (Beala di Supra) were founded by Aromanians, a lesser known but a very well-off ethnic group of the Balkans who have made huge contribution to the economy, politic, culture and education of all Balkan regions.
Gorna Belica or in Aromanian – Beala di Supra, is situated on the slopes of mountain Jablanica and the other – Beala di Gios, the village of my ancestors, was established in its foothills during the 18th century.
I remembered the stories how Aromanians from these two villages maintained very close relations and how they were at this time of the year collecting chestnuts for themselves and for trading. The chestnuts were staple food for them at that time and they used them in dishes in place of potatoes.
They preserved them for winter time making big hole in the ground, putting down first send, the smaller branches of trees, chestnuts and then covering them all with other branches, leaves and sand.
During the winters they used to cook chestnuts, make flour from them for cakes, soups and bread which stayed fresh for as long as two weeks. They roasted them, mixed them like we do with potatoes, other veggies, meat and other ingredients and enjoying in its delicious and semi-sweet flavour.

Chestnuts gave them great amount of carbohydrates and vitamin C that is comparable to that which we derive from wheat and rice. Chestnuts during its long history have helped people from many regions around the world to survive hard times and therefore it is not surprising that many called chestnut tree – the bread tree.
The value of chestnuts was very well known to Alexander the Great and the Romans who planted chestnut trees across Europe while on their various campaigns because chestnuts were important part of many army food in ancient times. It has been a staple food in Southern Europe, Turkey and southwestern and eastern Asia for millennia, largely replacing cereals where these would not grow well, if at all, especially in mountainous Mediterranean areas.
Along with its great value as food for humans, for pigeons, wild boars, deer and squirrels, chestnut is a beautiful majestic tree whose leaves have great colours during the autumn. From middle September to November it is the right time for chestnuts collection so it is great chance to include this amazing nut in our regular fall cuisine.
For me chestnuts will always be a part of my family history and memories of stories of their life in Beala di Gios.